The mountains of Western North Carolina have long been a place steeped in mystery. Legends range from reports of documented sighting of luminous, many-hued lights flickering against the darkness of the mountains-which some say are the spirits of lost travelers searching for their homes-to stories of chilling fascination associated with ghost towns dating back to the Civil War. Imagine, if you will, a solitary trek through a mist-shrouded forest where the snap of every twig beneath your feet echoes and every tree creaks and moans when the wind blows. What was that sound? Could it be the spirits lying beneath a nearby forgotten graveyard choosing this particular moment to mess with an ill-fated wanderer? 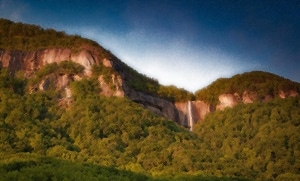 If you happen to be hiking in the area of the Hickory Nut Gorge, then you are passing through one of the oldest routes through the southern Appalachians. And one of the most beautiful. The villages of Bat Cave, Chimney Rock and Lake Lure lay nestled within the approximate 14-mile route from Gerton to Lake Lure. According to historians, we know that the Gorge formed one of the few natural gaps in the mountains, allowing settlers traveling west to pass through on their route to Tennessee and beyond.
But how was the Gorge with its high-walled valleys, craggy rock cliffs and narrow pathways actually formed? A popular notion is that earthquakes hundreds of years ago loosed the giant boulders, causing them to thunder down the steep mountainsides to the river below – the Rocky Broad River.

It seems fairly safe to assume that the first people in the Gorge were Native American Indians. To be specific, they were Cherokees, part of the Catawba tribe. Legend has it that the Indians were not comfortable in the Gorge. Actually, they feared the area, believing it to be inhabited by spirits. In spite of their superstition, though, the Gorge provided a gateway to the land below, allowing them access to their prized tobacco.
As years pass, so legends are born and nurtured. Apparitions on the mountainside, or appearing in the sky?
Veiled images swirling within fog, perhaps? When dusk begins to gather and the mists rise from the river bottom to grow thick and obscure the high rocky walls of the Gorge, a never-solved mystery becomes a reality to those who have in fact seen them. By them, I speak of the Little People of Hickory Nut Gorge. Local legend hints that they disappeared in the great earthquake. Or, that only a few survived and have long since passed. Some say that it’s only a myth, that they never existed in the first place… 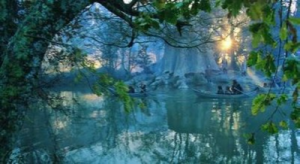 Ah, but the mystical tribe not only existed a century ago; they still do. What makes me such an expert, you might ask? Well, because I am a Little Person! First of all, you need to understand that we are not fairies.
Or elves. We do not have wings; therefore, we cannot fly. And although we are rarely seen, we are not invisible-only selective. Just so you know.

I am thought of among the People as ‘different.’ Actually, they look upon me as being very strange. This could be because I don’t go in for the constant drumming and dancing that occupies most of their days. But just because I’m not very sociable doesn’t mean that I don’t have feelings. I do. I just keep them to myself. Perhaps that’s how I got my name. The People call me Lanis: the one who is peaceful. And I don’t cry. At least, I don’t ever remember crying, although I have tried to do so on many occasions. My heart broke when the rocks rained down and took the mother and the baby and so many of the People.

Although my days are spent in quiet seclusion, they never reflect loneliness. You should also know that I am very brave. I wander these woods on nights when the fog comes and the owl hoots, but I never fall victim to imagined fears that feed the other children in the tribe. But that’s just me. 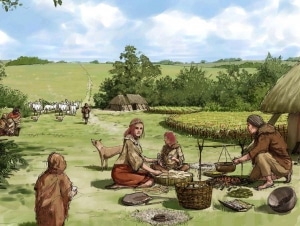 My daily chore is to gather nuts and berries and herbs. I never get lost, so I do this very well. Today, though, I am on another mission. My senses told me that today was the day. So, after rising well before the sun could burn through the early-morning fog, I slipped from my hut nestled underneath a rock outcropping. The first part of my trek took me down the steep mountainside to the river. And here I rest beside one of the deep, still pools. Gazing at my reflection in the crystal water, a not unfamiliar expression of distress looks back at me.

If only! If only my image would mirror a different Lanis! One with sleek black hair and blemish ­free skin instead of this mass of unruly russet tresses that constantly fall across my freckled face! I would see different body, too; a tall body with sinewy back and long, straight legs that would carry me through the forest with ease. But enough about me and my discontent with my appearance and on with my mission. The first part of my journey was easy; now comes the difficult part. Climbing up the other high wall (grunt) of the valley is difficult with my short legs (pant), but I can do it. I must do it. I must see (whew) them. One … more … time!

There; by threading my way through the tall ferns, scrambling over one huge bolder after another and reaching this rocky shelf just below the trail’ s edge, I’ll be able to see them when they come walking down the path. That was quite a journey! But I’m here now, and I’ll wait and watch them as I have countless times as they hunt for food or fish in the river. Today, though, I fear will be different and not in a good way.
Talk is, that the Tall Ones are leaving the Gorge forever, and that this is the day of their journey. It is said that they fear us. But why? We are so small! Some say because they believed us to be a family of specters, that their medicine men cast spells long ago, causing the boulders to rain down from the hillsides to crush us. I find that hard to believe. And even if there was some truth in it, we’re still here, aren’t we? 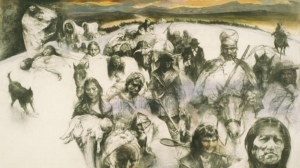 My people also talk in hushed tones of treasure buried in the Gorge and of the strangers who found it, fought over it, and are no more. Personally, I think that the treasure is all around us in the serenity of this place and all it provides us in life. Again, that’s just me-peaceful, simple.

Wait; what did I hear? Oh, it is them! My vantage point allows me to peek unseen just over the trail’s edge. Just look at them! The men walk ever so stately in front with their spears, their headdresses regal, their faces solemn. Behind them come the women, toting packs, with babes strapped on their backs. Their journey is silent and purposeful. I feel such anguish at their departure as all too soon, the last one disappears around the sharp bend in the trail. And I am alone once again.

The day is slipping away, and I must begin the arduous journey back to our huts. I cast one more furtive glance down the empty trail, as I brush the rain drops off my cheek. Wait a minute! The bright blue sky above the jagged outline of the pine trees shows no rain clouds! So, how can it be raining? Ah, now would you look at that-tears! Perhaps I’m not so different, after all. My tears, so long in coming, mourn the tall ones’ leaving. The spirits tell me that one day they will return, though, and perhaps then they will not fear us. 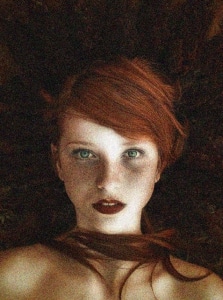 I, Lanis, will be here when they return and when others come as well. The Little People will always be here, for we are timeless-a timeless and enduring part of the mystique that is Hickory Nut Gorge. 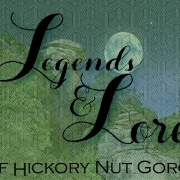 Extraordinary Property of the Week

Legends and Lore – Ghosts in the Gorge
Scroll to top